Discover the Jewish Heritage of Istanbul on this private tour in which you visit the main Jewish neighbourhoods and synagogues of the city, while you unearth the history of the Hebrew community in Turkey. 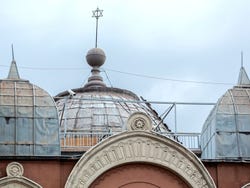 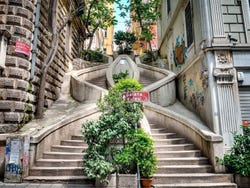 After collecting you from your hotel, we'll head to the Galata neighbourhood. This district housed the largest Jewish community in Istanbul.

The first stop will be the Ashkenazi Synagogue, the only active synagogue in the city and open to visitors. The temple was established in 1900 by Jews of Austrian origin. Jewish visitors can participate in the daily prayer.

Then, we’ll visit the Schneidertempel, an ancient Ashkenazi synagogue built by this Jewish ethnic division during the Ottoman Empire. It's currently a famous art gallery.

The tour will continue to the Karakoy area, where the prominent Kamondo family live and admire the numerous monuments built by this powerful Jewish clan. One of the most impressive landmarks is the Kamondo Steps, erected in 1850 in a mix of Art Nouveau and Neo-Baroque style.

We'll admire the exterior of the Italian synagogue and then delve into the history of the Hebrew communities in Turkey. We'll take a museum and interactive tour of the Neve Shalom Synagogue complex, the largest Sephardic synagogue in Istanbul, and the Fifth Centre Foundation of the Jewish Museum of Turkey.

At the end of the Istanbul Jewish heritage tour, we'll finish in the centre of Sultanahmet or in the Taksim Quarter, if you prefer.

If you want to extend your experience and learn even more about Istanbul's Jewish past, you can opt for the full-day tour.

In this case, in addition to the sites mentioned above, you'll visit the Ahrida and Etz Ahayim synagogues, as well as the Yanbol and Çana synagogues from the outside. We'll walk through the Jewish quarters while admiring the Hebrew houses adorned with Stars of David and the Balat Hospital (Or-Ahayim Özel Balat Hastanesi in Turkish).

If you choose the full-day tour, you'll have free time for lunch in the Ortaköy quarter. You'll find places with Kosher food, such as Café Eden or the café of the Five Hundredth Anniversary Foundation of the Jewish Museum of Turkey.

The tour includes free pick-up from most areas of Istanbul. You can see the map here. If you're staying outside the indicated area, we'll inform you of the meeting point once you have made your booking.

This is a private tour organized for you and your partner, friends or family.

All of our providers comply with local legislation and applicable health recommendations to avoid the spread of Covid-19.

You can book up until 30 hours before the activity as long as there are still places. Book now to guarantee your spot.

Wheelchair accessible. This must be indicated in the reservation.

Per group from
US$ 208.30
No hidden fees or surcharges
Free cancellation up to 3 days before
Book

Free! Free cancellation up to 3 days before the day of the activity. If you cancel under this time or do not show up, you will not be refunded.
like

7.60 / 10 206 reviews
Enjoy breath-taking views of Istanbul from the Bosphorus as the sun sets, enjoying an exquisite dinner and traditional Turkish music and dancing.
US$ 52
Book
like

European Side of Istanbul Tour

Join us on this tour along the European shore of the Bosphorus, where we'll visit breathtaking locations such as the Dolmabahçe Palace, the Rumeli Fortress, and Emirgan Park.