Although at first sight it seems to have similar dimensions to the Hagia Sophia, in reality, it measures about half its size. The central dome has dimensions of 23 metres diameter and is 43 metres high.

The Blue Mosque has six minarets which, when they were first built, caused uproar as the mosque in Mecca also had six. Later, and to placate devotees the Mecca mosque constructed a seventh to differentiate itself.

When entering the Blue Mosque you immediately understand its name: more than 20,000 blue tiles adorn the dome and the upper part of the mosque. All these tiles were shipped in from İznik a town famous for its tiles.

The illumination of the mosque comes from more than 200 stained glass windows, and the chandeliers that hang from the ceiling.

To enter the Blue Mosque, as well as the rest of the mosques in the city, you must wear the appropriate clothing and remove your shoes before entering. Women should cover their shoulders and hair. If you have nothing to cover yourself with, when entering you'll be given what you need to enter.

During the hours of prayer, the mosque is closed to tourists. 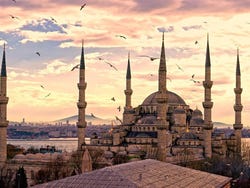 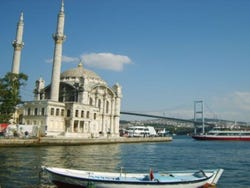 Inside the Blue Mosque 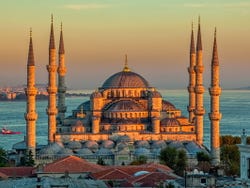 The Blue Mosque and Bosphorus 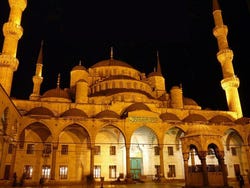