The palace style is a combination of Western baroque, rococo and neoclassical design mixed with traditional Ottoman style.

The palace was constructed between the years 1843 and 1856, on the orders of Sultan Abdülmecid. Four different architects from the Royal Ottoman Architecture Department had a hand in its construction.

With a facade more than 600 metres long and a surface of 15,000 square metres, the Dolmabahçe Palace is the largest building in the country. Inside there are 285 bedrooms, 43 halls, 68 bathrooms and 6 Turkish baths.

in 1984 the palace was converted into a museum.

The visit is broken into four parts: Selamlik, Hareem, Clock Museum and Glass Pavillion. The most important and impressive parts are the first two.

This part plays host to the administrative and official halls and is the most striking part of the palace. Of special not are the Glass Staircase and the Throne Room. This last hall, due to its dimensions (2000 square metres and 36 metres tall) and ornamentation (56 columns and the largest chandelier in the palace) is overwhelming in its opulence.

The hareem were the private quarters of the Sultan and his family. This part of the palace is a little less interesting than the first, and the visit doesn't last quite as long.

To visit Selamlik and the Hareem, you have to do so in a group. Guided tours take place in English and Turkish, although should you wish there are guidebooks in other languages.

Although the Dolmabahçe Palace has a handfull of rooms that will take your breath away, its Western style, relative distance from the centre and the fact you can only explore it as part of a guided tour mean it loses some points. We recommend that you visit it only if you have time to spare, if you're staying only for to or three days there are more important sights to see.

If you decide to visit the palace we recommend that you do so as early as possible: as the day goes on and more people arrive, tour groups can be very large, somewhat spoiling the visit. 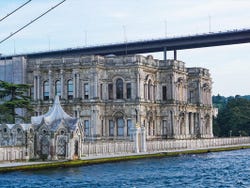 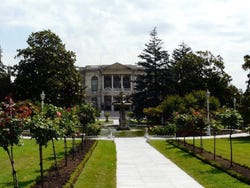 Main gardens in the Dolmabahçe Palace 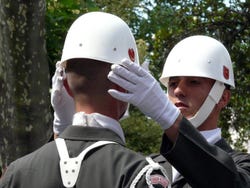