The Galata Bridge does not only connect different parts of the city, but is also a symbolic bridge, representing the connecting of cultures.

The first bridge over the mouth of the Goldern Horn was constructed in 1845. Several years later in 1863, Napoleon II's arrival meant that it was substituted for a wooden construction, and afterwards other bridges were built in 1875 and 1912, and in 1992 the bridge you can see today was constructed.

Today at the bottom of the Galata Bridge there are various restaurants and cafés where, as well as enjoying fresh caught fish and other typical Turkish dishes, it's a great place to see the coming and going of the boats as the patient fishermen sell their catch to the local restaurants.

As well as being an important part of the urban landscape in Istanbul, the Galata Bridge occupies a major role in the myths and legends of the city, not to mention the hearts of Turkish citizens. 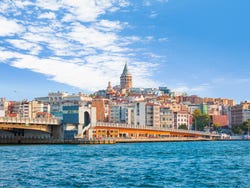 Fishermen on the Galata Bridge 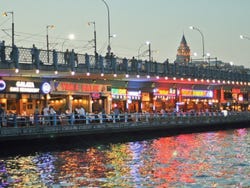