This bath can be found in the historic centre of the city, next to the Grand Bazaar, the Constantine Column and other touristic sights.

The Çemberlitaş Hammam was built by Sinan in 1584, during the rule of Sultana Nurbanu, born in Venice in the middle of the 15th century and brought to Istanbul by Ottoman courtesans. The distinctive touches of Sinan, the empire's chief architect, can be seen in the magnificent domed interior.

That it's the most famous bath in Istanbul also makes it the most expensive, something that does not necessarily mean a better service. Its architecture, however, is stunning, with columns and natural light streaming through windows in its high domed ceiling. It's perhaps the best way to get the feel of a truly historical Ottoman bath.

The bath, although it admits both men and women, the halls and the treatments are unisex. If you are looking for a mixed bath, you should go to the Suleymaniye hammam.

Although there is an option with no services included, if you opt for the most common pack it includes an exfoliating massage for 15 minutes and a half hour oil massage. The price of this service is approximately 60 TL (US$ 3.20). 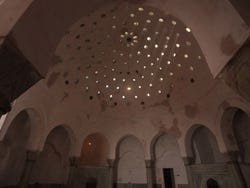 Mondy to Saturday, 6 am to midnight.