These days, Istanbul has a modern cruise port found in the Galata neighbourhood, next to the bridge of the same name, in the north of the European part of the city. The port itself is very well connected by Tram, which allows you to visit the city without any problem.

Embarking in Istanbul, it's possible to visit many different ports, from the classic ports in the Adriatic such as Athens, Venice and the beautiful Greek Islands, to other attractive destinations such as Kusadasi and Bodrum in Turkey, or new emerging destinations on the Black Sea such as Sochi (Russia), Odessa (Ukraine) and Constanta (Romania).

The cruise season in Istanbul normally begins in the month of March and runs until the beginning of November. However, the trips to the Black Sea do not usually take place in Summer, rather between March and April and between September and October - therefore you should take this into account if this is the area you're looking to visit.

Many cruises make stops in Istanbul, but much fewer have the city as their departure point. If you want to take a cruise leaving from Istanbul and enjoy the city at your own pace, you'll need to be organised and reserve with enough time to spare.

We recommend that you take advantage of the offers between November and February, especially if you're travelling as a family or group, as the boats have very few triple and quadruple cabins. 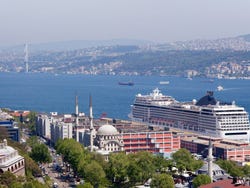 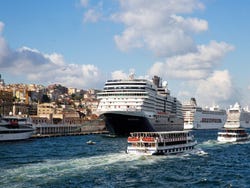