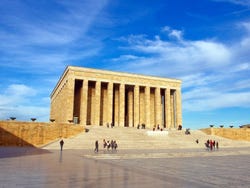 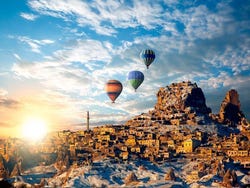 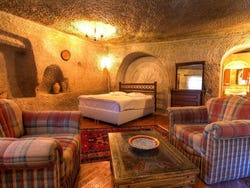 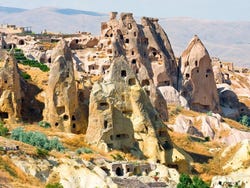 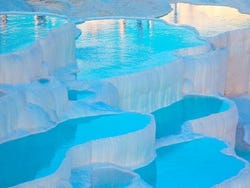 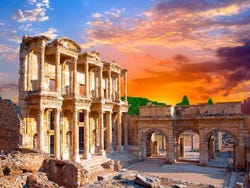 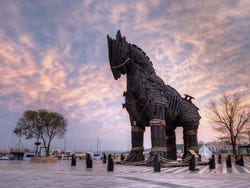 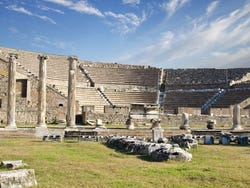 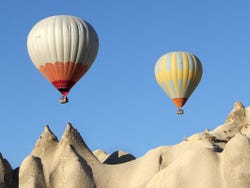 Board a comfortable bus at 1 pm and set off to Ankara, capital of Turkey, located 450 kilometres away from Istanbul. One of the highlights of the journey is when the bus crosses the enormous Bosphorus Bridge.

After a few hours on the road, you’ll get to your hotel. Enjoy an exquisite dinner at the hotel before you go to your room.

Once you’ve enjoyed a delicious Turkish breakfast, you will embark on a tour of the capital city. The guided tour includes admiring Ankara’s most important landmarks, including the Museum of Anatolian Civilizations. It accommodates numerous collections of Anatolian archaeology, such as items from the following periods: Paleolithic, Neolithic, Hatti, Hittite, Urartu, Phrygia, among others. Then, you’ll visit Anιkabir, the mausoleum of Mustafa Kemal Atatürk (first President of the Republic of Turkey).

Afterwards, leave the capital behind and head to Cappadocia. On the way, you’ll stop at Saratli, a surprising Underground City founded by the Christian communities to protect themselves from the Muslim Arab attacks. While you visit the well-preserved city, you’ll wander around the old stables, rooms and public wards.

You will arrive in Cappadocia in the late afternoon. After savouring a traditional regional dinner, you’ll marvel at the Dervishes spin around and around during a Whirling Dervishes Show. The Sufi whirling is a unique way of spiritual meditation and prayer.

Enjoy a healthy breakfast and set off to explore the stunning landscape of Cappadocia, one of the most famous regions of Turkey, packed with astonishing rock formations, fairy chimneys and moon-like scenery. You'll also have the chance to go on one of the world's most famous balloon rides - if there's one image that stands out in Capadoccia it's the hundreds of balloons in the sky at sunrise.

On this guided tour, you will visit Göreme, an area full of houses and churches chiselled into the sandstone rocks and paintings from the tenth and eleventh century. Then, visit Uçhisar, a troglodyte village with stunning cave houses. Followed by the Monks Valley, home to the most striking fairy chimneys and the Derbent Valley.

Once you have marvelled at the unique landscape of Cappadocia, you will return to your hotel.

Enjoy a delicious breakfast and leave Cappadocia behind on your air-conditioned coach. The tour heads to Pamukkale, location of the ancient Greco-Roman city of Hierapolis.

Mid-journey, you will stop at Sultan Han, a Seljuk caravanserai established during the thirteenth century: then once in Pamukkale, you'll have free time to discover the 'cotton castle' a unique sight made of thermal pools and petrified waterfalls.

After a busy day, you’ll head back to your hotel where you will enjoy a filling dinner and spend the night.

Hop on the bus in the morning and set off to Ephesus, a city dedicated to the Goddess Artemis.

On your way to İzmir, you’ll stop at a leather factory to see how the leather is processed.

Upon arrival in İzmir, the country's third largest city, we'll head to the hotel where we'll eat and spend the night.

Leave İzmir behind and head to Pergamon, the historic city situated very near the modern town of Bergama. Once you get to the ancient Greek city, you’ll visit the well-preserved ruins, especially of the Sanctuary of Asclepion, the first hospital in Asia Minor.

Afterwards, head to Troy, a world-famous historical city that dates to the late Classical antiquity and the setting of the Trojan War. While you wander around the archaeological site, you’ll see the wooden horse used during the filming of Troy with Brad Pitt.

Continue your trip towards Çanakkale, where you’ll have dinner and spend the night.

Day 7: Bursa and return to Istanbul

In the morning you’ll make your way to Bursa, the first capital of the Ottoman Empire between 1326 and 1364. Explore the historic centre on a guided tour and admire the city’s top landmarks such as the Grand Mosque of Bursa, Koza Han Bursa Silk Bazaar and the Green Tomb.

After a fun-filled week discovering the best of Turkey, you will be back in Istanbul at 4:30 pm. You will be dropped off at your hotel or where you prefer.

The hotels included in this multiple day tours are the following:

Your guide will collect you from the following areas in the centre of Istanbul: Check out this map.

If your hotel or apartment is not located in the previously mentioned areas, the local tour provider will confirm the time and place of your pick up. If there are any last minute changes, they will notify you of this via WhatsApp.

* A reservation for one person will include a supplement.

Please check local restrictions before traveling. All of our services comply with recommendations to avoid the spread of Covid-19.

Hotel pick up and drop off.

Admission tickets to all the monuments and museums seen during the tour.

You can book up until 5 days before the activity as long as there are still places. Book now to guarantee your spot.

US$ 491.70
No hidden fees or surcharges
Free cancellation up to 7 days before
Book

Free! Free cancellation up to 7 days before the day of the activity. If you cancel under this time or do not show up, you will not be refunded.

These are genuine reviews written by our customers.

I travelled with friends
8

Beautiful tour that has undoubtedly been worth it to get to know the best of Turkey in a few days. I consider that the tour is very well organized and there are many places full of history known. We had a very good guide, Orham, I recognize his good knowledge and patience because managing a group of more than 20 people is not an easy matter and especially when it comes to Latinos who love to talk, laugh, joke. The cohesion of the group was phenomenal. It would cut down on unlimited time in stores. Opinion translated. Show original.

I travelled by myself
8

The only thing that would change would be the stops in the shops, such as leather, jewelry, etc. and to be able to move something from the official itinerary according to the preferences of the group. The rest is perfect. Opinion translated. Show original.

I travelled by myself
6

I travelled by myself
8

I travelled with my partner
Show all the reviews
like

9.40 / 10 10 reviews
Cruise along the Bosphorus and see landmarks including Galata Tower and Bosphorus Bridge. When you get to the Black Sea, take a swim and enjoy lunch on board.
US$ 73.40
Book
like

9.30 / 10 27 reviews
Aga Hamami is a historical hamam (Turkish Bath) and one of the oldest in Istanbul. Beautifully decorated, authentic and well priced. The perfect Turkish Bath.
US$ 33.30
Book
like

8.50 / 10 13 reviews
Explore the vibrant city of Istanbul on a private tour and choose which landmarks, museums and neighborhoods you want to visit.
US$ 127.70 per group
Book